The kids were still quite small when my wife won the David T. K. Wong Creative Writing Fellowship. We packed up the whole family and relocated to the UK. The children desperately wanted a pet, but these thoughts were put on hold by our travel. They had to make do with a grumpy old cat we inherited in Norwich.

We arrived back in Australia in time for Christmas, and it’s one I love to remember.

Not put off by the Norwich experience, the little ones still longed for a pet. Secretly my wife and I agreed that we’d get them a kitten for Christmas. I found a little grey tabby at the Cat Haven and hid it in my studio. On Christmas morning it disappeared. After some desperate searching on my part, it finally came out of hiding with a little squeak squeak.

That cat did a great job of being a devoted children’s cat. Every morning at breakfast time, it would take its seat on a sheet of A4 paper and supervise them as they ate their breakfast.

The children were about three and five. They were too young to settle on one name. They named that cat probably 500 times. I think the names were a way for them to articulate their love for it and the effect that it had on them. Maybe it was their form of poetry. Eventually, it became known as Mao or Meow or Chairman Mao.

Cats vary, just like people. Some of them are pretty dodgy characters. If you get a good one, it’s something to celebrate. At Christmas time I remember Mao and all the joy he bought our family.

I hope you have a fun time in the lead up to Christmas. I’ll be delivering paintings all over Perth right up until Christmas eve. 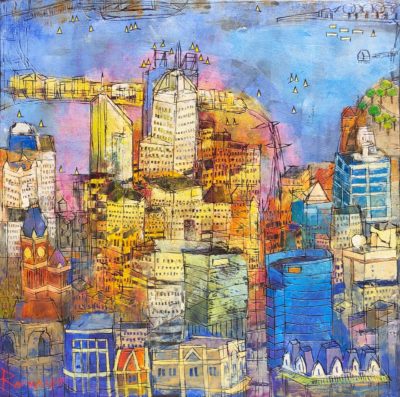